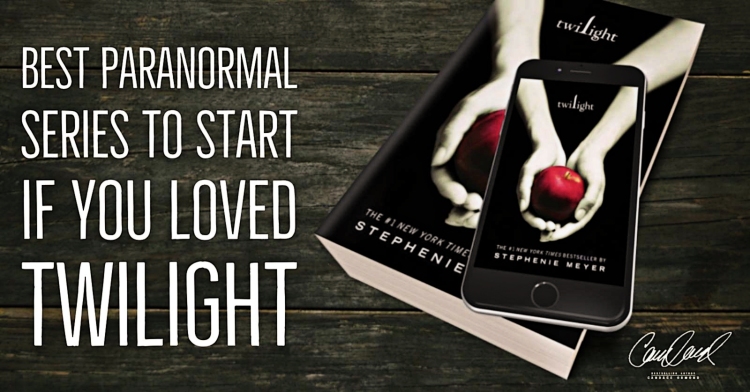 I loved Twilight. It had ups and downs, a little bit of romance, and werewolves vs vampires. What more could you want? However, once that was over, I was looking for another series that would stay in the Paranormal category but give me just as much excitement and tension as the Twilight Series. Luckily, I found some! In fact, I ended up loving some of these series more than Twilight!

The Mortal Instruments is a series comprised of six books, plus two series spin off (The Infernal Devices and The Dark Artifices). The main series follows a young girl named Clary Fray who believes herself to be a normal teenager with a strange artist for a mother. However there is a lot more to the world than she thinks. Clary unveils a world of Shadow Hunters, ancient demon fighters created by angels and she soon discovers that she’s one of them.
Start the series with City of Bones!

You want more Vampires? Well, this is the series for you. Just like the TV show, The Vampire Diaries follows two main protagonists (Stefan and Elena) of which one is a vampire and one a human. If you like love triangles, this series is full of them. Elena is a human teenage girl who falls in love with a vampire, but, not just him; his brother also. And that, my friends, is just the tip of the iceberg.
Start the series with The Awakening!

Come follow Avery Quinn and she leaves her small town behind to attend art school in the city. But her calm, cool world explodes overnight with mythical creatures of every race. But it all starts with a tiny, blue sprite seeking refuge in Avery’s bedroom from the evil fairy queen. From there, Avery plunges deeper into a world of ancient politics and mythical war that’s been brewing for decades.
Start the series with Iron & Wine!

Daughter of Smoke and Bone

This fantasy series follows a young blue haired seventeen year old girl named Karou. Karou is quite the interesting character; she is able to speak numerous languages, her hair is naturally blue, apparently has three bullets inside her stomach and was raised by human/animal hybrids that go by the name Chimaera. If you like strange creatures, resurrection, a teeth thief and an upcoming war then this is the perfect series for you.
Start the series with Daughter of Smoke and Bone!

If you want a true rival of Twilight, then look no further. The Vampire Journals is a 12 book series that follows Caitlin Paine, an 18 year old high school student that has been ripped away from her quiet suburban home to attend a new school that has a dangerous reputation. Very soon after Caitlin feels changes happening within her, she is stronger, light is starting to hurt her, and she is hungry. Caitlin somehow finds herself in the middle of a vampire war and travels back in time. She too is caught in a love triangle between two men and must decide carefully what moves she will make.
Start the series with Turned!

What if society was made up of two colors? The Red and the Silver. The Red are common folk, and the Silver are the elite that ruled them. That is exactly the Case in the Red Queen Series. Mare Barrow, a young red girl finds herself working inside the Silver Palace. It is not the place a red would like to be. However something is different about Mare, and the Silver know it. The Silvers are fearful of Mare and decide to claim her as a long lost Silver Princess. What could go wrong?
Start the series with Red Queen!

This series tells the tale of a young teenage assassin named Celaena Sardothien. She was imprisoned for a year by none other than the king. When the kings song offers her the chance to compete against other thieves and assassins she accepts. Whoever wins the competition will spend the next four years serving as the King’s champion, then, freedom.
Start the series with Throne of Glass!

And there you have it! If you’re one of the many who devoured the Twilight Series by Stephenie Meyer, then you’d fall in love with any one of the series above. Have you already read some? Do you have suggestions that I should add to the list? Feel free to comment and share below! And for more awesome book recommendations, be sure to sign up for my weekly newsletter here!

This site uses Akismet to reduce spam. Learn how your comment data is processed.